Aspiring artist Lil Turk from malmø, sweden is starting out his journey to the top. we have had a chat with the artist about school, inspirations, his current situation and more. watch him take the steps from underground to mainstream.

WHAT’S UP LIL TÜRK, ALL GOOD?

YEAH, CAN’T FUCK WITH THA SQAUD, GOOD TUNE. BUT FOR THOSE WHO ARE NOT FAMILIAR WITH YOU, GIVE A SHORT INTRODUCTION OF YOURSELF

Bitch it’s Lil Türk from Malmö South Sweden and I’m lit. Well my rap name is Lil Türk because my pops is Turkish-Cypriot. (Cypriots is people that come from the island Cyprus). But my real name is actually Isak Salih, my friends and family call me Isak. I just turned 18 and I’ve been putting out music for about 3 months now and I really enjoy making music.

WHEN WE FIRST LISTENED TO YOUR MUSIC, WE FOR SURE GOT CHILL VIBES, BUT WE COULDN’T REALLY TELL WHICH MUSIC YOU MAINLY LIKE DOING, SO WHICH TYPE OF MUSICIAN WOULD YOU CLASSIFY YOURSELF AS?

I get where the chill vibes come from definitely and I try to get chill vibes in my music, but at the same time make it lit with often a catchy hook, as I have in almost all my songs. I mean, I don’t wanna sound like any other sound of course, so I guess I’m tryna pave my own lane and put Malmö on the map.

WITH AROUND 5000 PLAYS ON SOUNDCLOUD, AMERICAN DREAM IS KIND OFF MAKING A NAME FOR ITSELF. INSTANT CHILL BANGER.

ARE THERE SOME ARTISTS OUT THERE YOU LOOK UP TO, OR ARE LIKE INSPIRATION FOR YOU?

Okay, so my favorite artist of all time is Kanye West and after him it’s Travis Scott. Like Kanye’s ''808’s & heartbreaks'' and ''My Beautiful Dark Twisted Fantasy'' kind of shaped the person I am today. I listened to MBDTF for like a year straight when it came out. Of course I’ve got influences from my parents like Jimi Hendrix, UB40 and like hard rock as well, but what got me into rap was back when me and my brother slept in the same room and he would blast 50 cent, Eminem, 2Pac, DMX and all of that. So I guess that’s what got me into hip-hop yea.

PERSONALLY KANYE IS MY FAVORITE TOO... BUT WHATS UP WITH THE FUTURE, HAVE YOU MADE ANY PLANS?

I wanna continue with this music shit and see what happens. I mean I’m getting a little bit of recognition now, but of course I want more, but I have no doubt it’s coming. I’m still in school and I’ve got one year left in what’s called “gymansiet” in Sweden which is like high-school I suppose and I’m not sure if I’ll continue with university and shit but we’ll see I guess.

BY HAVING A LOOK AT YOUR INSTAGRAM, I CAN SEE THAT YOU ARE STYLISH.

That is correct yeah. My older sister is lowkey a fashion designer and really inspired me to get into fashion to for sure. Shouts out Safiye. 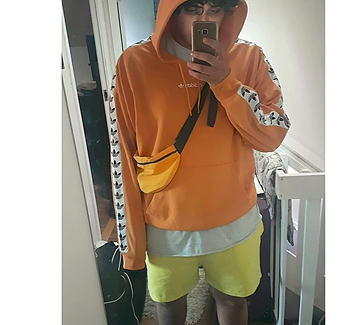 Where I’m from everyone wear Adidas, it’s like weird if you don’t, so definitely three stripes. Thing is I aIn’t got no money right now so I can’t really buy designer shit yet, but like Gucci is lit as fuck, I fuck with forever 21, weekday, Hilfiger, vans but like also cheap shit like H&M and like thrift shops too. Thrift shops is fye.

WHICH ARTISTS DO YOU PERSONALLY THINK HAVE THE BEST STYLE?

Definitely Rocky he cool as fuck, Carti also a bit lit. Also a Swedish RnB artist called Leslie Tay got the sauce here in Sweden for sure.

MOVING ON, HOW WAS YOUR CHILDHOOD?

So I grew up in like a working class area where there’s a lot of kids that are from foreign countries, but born in Sweden like me. My moms is full on Swedish, but as I said before my dad is Turkish-Cypriot, which I represent in my rap name of course. My parents is the shit, I love them to death and I couldn’t have any better parents, I got 2 older siblings too, 1 brother and 1 sister. I used to sleep in the same room as my brother until I was 11, and we moved away to a bit bigger house where I could have my own room, which helps me record my music of course.

HOW IS IT TO BE SWEDISH AND TURKISH?

It’s whatever really, like, of course it’s cool to live two different cultures and stuff yea. I mean, I don’t really look Swedish so of course I’ve experienced racism in Sweden which is bigger than what people outside Sweden think.

IT IS SAD PEOPLE THINK RACISM IS AN ACCEPTED BEHAVIOUR, THEY DON'T UNDERSTAND WE ALL BLEED THE SAME COLOR.

SO YOU ARE STILL IN SCHOOL

HOW IS IT TO COMBINE BEING AN ASPIRING ARTIST AND HAVING TO PUT TIME INTO SCHOOL?

At this point it isn’t that hard with time and stuff, I mean I don’t really have good grades, but they good enough so. I guess if I’m getting bigger it’ll be a dilemma, but right now I ain’t really too worried about it.

PLUG ANYTHING YOU WANT PEOPLE TO KNOW OFF.

First of all I wanna thank Fraxille for this chance to let people get to know me a bit more than just your everyday soundcloud rapper lol, make shouts out to my family, friends, fans and haters, bye!

Compatible with all DAWs. If necessary further specifications is listed on the product page.

All our instruments, packs & kits are made with real instruments and hardware synthesizers.

Be the first to know about new collections and exclusive offers.